The world of Seven Knights is called Gaia and is divided by two continents: Asgar (Maps 1 to 7) and Aisha (Maps 8 to 13). Originally Gaia was one whole land but it was divided into twelve by the god of destruction. It also seems that Telus is the future version of Gaia world, after a major catastrophe and explosion destroyed most of the world. Map 14 was released in 2020 in global. 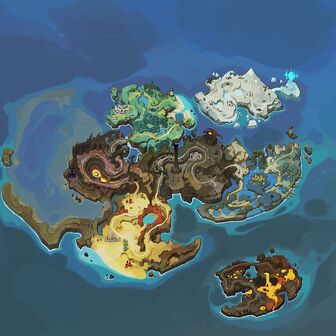 Asgar takes inspiration from European Cultures and themes of the Middle Ages. The seven knights each rule a region in Asgar.

It is located near the Mystic Woods and is the most developed part of Asgar. It is ruled currently by Elysia after she deposed of the former evil king.

It is located in Silent Mine and it was invaded by Orcs. Eileene was able to liberate Fodina and Silent Mine from the monsters and she rose to become Empress of Fodina.

It is located within Blazing Desert and it has been ruled by Rachel's family for generations. Descendants of Agnia family can control fire.

It is the remains of Skytria Empire, later known as skia, 1,500 years ago.

The dragon temple is located here and it is where Weiser, guardian dragon, used to live. Monsters and people are afraid of this area because of stories told about the guardian dragon.

Land of yetis and bears. Ruled by Lania. Protected by Spike. Spike's Castle and Secret Mine (Light Element's Special Dungeon) are located here. In the story Spike becomes king of frozen land.

Frozen land is a land where ancient dragons used to reside. The ice castle is located here and it was the home of both Spike and Lania. Lania gives up the throne for Spike and Spike becomes king of both the castle and the land.

It is where all types of low-rank and upper-rank demons reside. Kris trained his army of demons here when he prepared to invade Terra. Kris later makes Aquila in charge of Purgatory after he becomes too busy to rule. 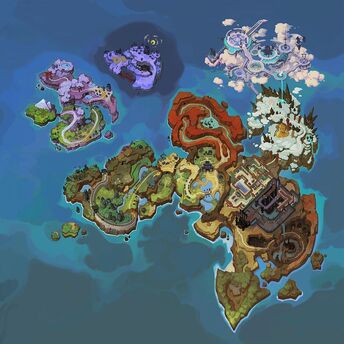 Unlike Asgar which is heavily inspired by Europe, Aisha is inspired by Asian culture. Four lords are put in a position to rule different territories to help the emperor with the governance. The continent itself is now ruled by Rin.

It is located in the isle and it is the hideout of the holy cross crusaders.

A large country surrounded by water in Aisha. It was flourished by trades from Asgar but now most trades have been cut off. There are several lands within Moonlit and the largest land, including the whole isle, is called Moonlit and Moonlight. It was previously a target for wars as local families fought against each other for supremacy. Teo helped Ace's grandfather in the war and he unified the isles into a single territory.

It is an area with many protection troops and armies to prevent invasion of Aisha.

A defense area, is located here and it was the home of warrior and noble families including Feng Yan, Soi's and Rin's. The most famous of these families is from Soi, talented in archery.

The Famous market of flourishing is located here. many celebrations are held and it is famous for its food produce and goods. Some guards and security teams come from this area, likely to also protect from invasion. A very popular tavern is located here where Ling Ling's mother produces drinks.

Three countries known existed before the unification of Aisha. They were later unified and Guan Yu became the king. His position is below Pascal and similar to Ace.

A mountain area previously ruled by Xiang Yu's family until Pascal invaded and took over. Lu Bu is then put in charge of this area by Pascal.

It is located here. Those who escaped civilization and tried to gain enlightenment to become sages moved here. They try to live a humble and healthy lifestyle including avoiding eating meat. It is also the place where Sun Wukong resided. When the power of destruction spread, the area became very affected and wrecked.

The divine palace is located here and many army and military families live here to protect the palace. Some of these families include Nezha, Bi Dam, Kwonho.

Palace of Emperor Pascal. Protected by Karma and Princess Rin. In the story, it becomes the palace of Rin after she becomes empress.

It is the true residing place of the emperor. There are secret passages here and it is formed like a puzzle. No one can dare to harm the emperor because of the way it's formed. The imperial guards, Giparang, Jake and Asura reside within the dark sanctuary.

Hideout of the Shadow Clan. Ruled by Kyle. The previous head of shadow clan was Kyrielle and Ballista's father.

They are a subordinate organization of the dark knights. It is a clan where ability means rank. Someone in the clan had previously asked Kyle to execute Teo.

Land of the White Wolves. Protected by Yeonhee.

These stairs were previously created by the ancients to reach the heavens but the interference of deities had broken and destroyed the passageways to the heavenly world. It is where the Night Crow Nest is located. 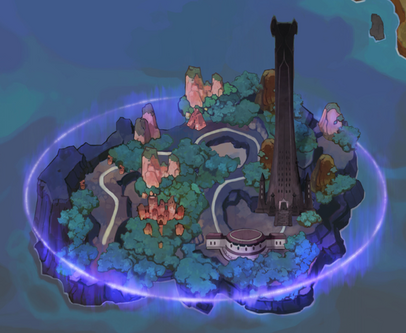 It is the hideout of the dark knights and all the members of the research Tower. Many sages had been kidnapped and taken here to go harsh experimentation and test. The dark tomb is later relocated here. It is also the relocation of the Dark tomb, formerly Skia kingdom's location.

A forest full of magical activity where it is very easy to get lost. Branze & Bransel likes to play here.

It is a world located above Gaia world. Just like Gaia, there are many different species living here. The jade emperor rules the heavenly kingdom and it is where many celestial species like Branze & Bransel, Hellenia, Heavenia, Sun Wukong originally came from.

The heavens is protected by eight guardians who hold very high positions in the heavens.

This is where the war between the demon lords and celestial guardians start to take place. It is where the Gaia forces attempt to reach the heavens and eventually are successful.

This takes place in heavenly world as is a continuation of the heavenly war and the fight between Gaia, celestials and demon lords. Valhalla castle is the place of the valkyries and the main setting. 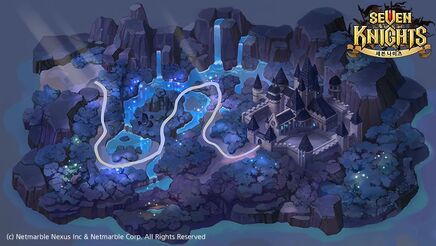 This takes place in the dark forest of Gaia. It is a continuation of the issues between Asgar and Aisha and the affects of the abyss.

Retrieved from "https://seven-knights.fandom.com/wiki/Maps?oldid=51770"
Community content is available under CC-BY-SA unless otherwise noted.