One of the knights brought from the other world. He was originally born into a white magic family but Mercure one day decided to rebel against them and started secretly learning dark magic. Mercure was kicked out of his family for his rebellion and continued serving the dark mage who was secretly training him. After a war breaks out, Mercure puts to test the dark magic he learned. After his success and impact during the war, he was appointed as a Dark Knight. In the end, Mercure learns all necessary about black magic, but he decides to start conducting research to develop and create his own magic. In a video featuring Branze & Bransel, it was revealed that Mercure was experimenting dark magic on Nezha and Yu Shin.

He first appears in Episode 12 where he is getting scolded by Yeonhee. Yeonhee tells him to sit and wait but Mercure says he is tired of just waiting. He tells her that he's not young either, it is believed that he's much older than he appears (he could have managed to stay young due to black magic).

He also appears in Episode 27. Branze & Bransel had broke into his lab and cause major wreckage but Mercure said he put his valuable research materials in a safe place. Colt and Mercure argue as Colt makes fun of his obsessions for the Power of Destruction. He also tells Colt and Platin to 'get a room' since Colt flirts with Platin. It is possible that Mercure knew Colt from the past in the battlefield, both coming from Telus.

He once again appears in Episode 31 talking to Platin. As ordered by Dellons, he decided to take Silvesta, who was consumed with guilt and despair, and decides to make him a test subject. Silvesta endured a lot of pain and was ultimately awakened with the Power of Destruction.

Mercure is considered the only real villain among the Dark Knights; Dellons wants to revive his lover, the twins want their temple back, Platin wants to obey Nestra, Colt wants to repay back a favor to Pallanus, Pallanus wants to revive Telus and Silvesta was brainwashed.

He was the one to experiment on Silvesta, Yu Shin, Nezha and tried to kidnap Da Qiao's father.

He appeared in the Land of the Dead cutscenes alongside the other Dark Knights. He said they should try to defeat the Night Crow and the Seven Knights but Pallanus tells him that they could cooperate. After the war, he vanishes with the other Dark Knights (except Dellons) without leaving a trace.

He talks with Colt and appears much nicer than usual. It is revealed that Telus is actually the future version of the Gaia world.

It is also revealed that he has been conducting experiments alongside Freyja on Mist. Mercure is excited about testing his knowledge on the Valkyrie Mist while Freyja plans to use Mist as a way to prevent Ragnarok. 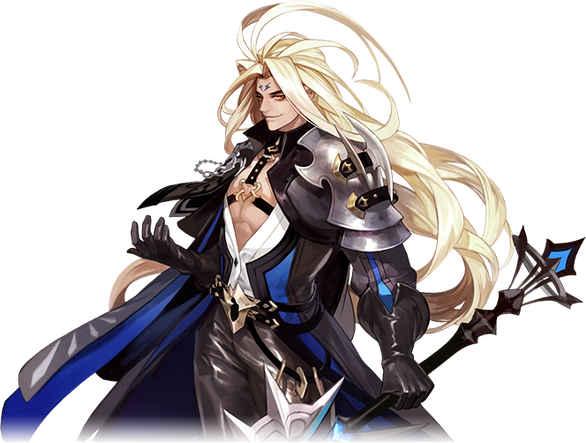 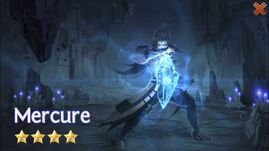 Favorite color: black
Hates: White
People they like: Himself, his teacher
Hates: his own family
Favorite food: Caviar
Hates: Milk
Likes: Money, evilness
Hates: Anything with laws and order
Other hobbies: Experiments, dark magic, new things, challenges, strong power
Hates: White magic, discipline, morality
Personality: Has quite a blunt and selfish personality. He's indifferent to what happens to others but can become very interested in those that intrigue him so he can use for his experiments. He hates rules and restrictions. He believes in self-superiority and believes he's a genius with strong magical powers. He is curious on killing. Though he just seems to have a cold aura but is much more selfish inside and a complete madman who will go very far for his methods. He is addicted in experimenting on things and people.

Retrieved from "https://seven-knights.fandom.com/wiki/Mercure?oldid=52779"
Community content is available under CC-BY-SA unless otherwise noted.