He was the son of a prestigious noble family but he spent most of his youth in the temple. He was chosen as the successor to the high priest because of his noble blood and borrowing power from the goddess. He was the one to take care of the twins after they fell from the Heavens and took them in his temple. With his new powerful magic he actually made the temple collapse along with the whole land. By orders of the goddess, he became the founder of the Dark Knights for the purpose to resurrect his destroyed world. The twins said they would get their revenge (as Platin was responsible for the collapse of the temple) as soon as their mission was fulfilled but they still respect Platin.

Unlike the other dark knights, Platin is kinder and more patient. He was disgusted at how Mercure experimented on Silvesta in a very merciless manner. Platin feels compassion for others and just wants to revive Telus, the Dark Knights’ world. 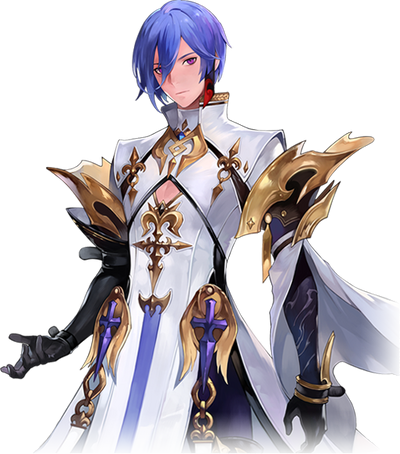 He first appears in Episode 23 where he is talking to the goddess, Nestra. He had recently arrived to the Gaia world and he prays for the salvation of both worlds since Gaia is also on the verge of destruction. He also meets Branze & Bransel in that Episode and tells them to gather all the other knights.

He later appears in Episode 27 where he stops a fight between Rudy and Colt. Platin tells Colt that Pallanus never ordered her to attack the Seven Knights. He tells her that they should attack the Seven Knights when they're all together. He also talks to Mercure where Mercure explains the power of the fragments and how it can awaken or destroy anything. Colt often flirts with him but he does not respond to any of it.

Platin also appears in Episode 28 where he talks to Rudy just before Rudy's awakening. Platin explains they share similar beliefs and values and that Platin needs the Power of Destruction in order to revive Telus. Rudy, at first, is hostile but then awakens by choosing to follow his own path rather than the path of light.

He makes another appearance in Episode 31. Mercure tells him about Silvesta's experiment and Platin is completely thrown off. Platin gets made since he had told Mercure not to do it but Mercure did it anyway. Unlike Mercure, Platin feels compassion and sympathy for Silvesta.

He once again appears in Episode 35 standing alongside Pallanus. Platin asks her if war is the only way which Pallanus says it is. Platin is hopeless but agrees to the war. Pallanus then gives the command of starting the war.

After the war and the betrayal of Dellons, who took the fragments for himself, Platin vanished along with the other Dark Knights.

He meets with the Pentagon where they plan to obtain the emerald tablet which has information on the abyss. However, Platin is pushed into Ante’s Dimensional Gate by someone disguised as Teo. He later encounters Ethella, a young girl that resembles Yeonhee and she asks for his help. Later Ethella is blasted off by Judas who tries to convince Platin that they both share the same goal and are followers of Nestra. However, Platin asks Judas why a goddess would bring so much pain and destruction and refused to save the people from perish centuries ago. Judas shrugs off his comments and says he has never doubted the goddess. Platin refuses to believe in Nestra again and this angers Judas.

He encounters Judas once again and they discuss Nestra again. Judas also reveals that Ethella and Tii are both dimensional managers and that Ethella is the chimera who helped Elena seal Nestra into the abyss. When the dimensional boundary cracked during the War of Destruction, Tii had to save and take Ethella to Gaia. The process separated Ethella’s body and soul, with her soul staying behind wondering in the abyss.

Judas explains his hatred for Ethella, who contributed to the sealing of all of Nestra’s followed centuries ago. 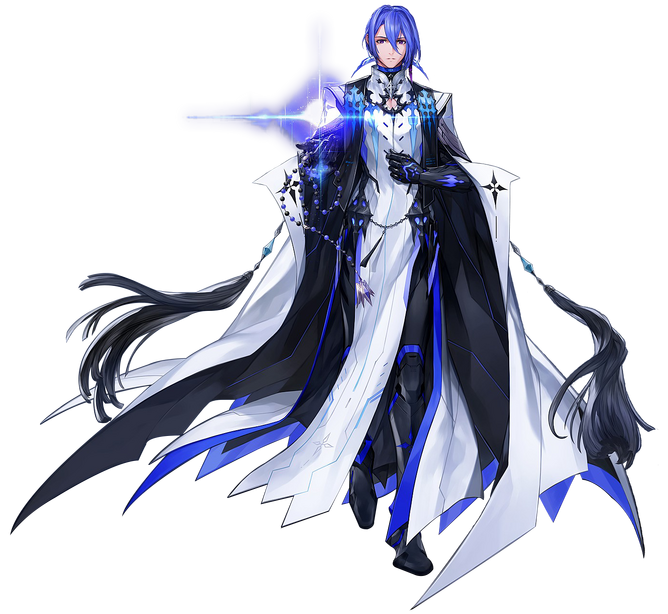 Favorite color: Clean and antique colors like white, gold, silver
Hates: Black, red shades
People they like: Pallanus
Hates: Not specifically anyone but Mercure, Dellons] and Yeonhee make him uneasy
Favorite food: Wine, fruits, vegetables
Hates: Fatty foods, bitter herb
Likes: order, peace, charitable works
Hates: Desire, pessimism, war, chaos and disorder
Other hobbies: Religious studies, reading, walking, fishing
Hates: Noise, dark magic
Personality: As calm as flowing water. He's known for being kind and gentle and treats everyone as equal. He can control emotions quite well and does not lose his composure easily. Although he appears conservative he's quite open/fluid to certain situations. He doesn't accept anything outside of peace but does not reject everything outside the rules, just doesn't follow them. He's very devout in his religious studies and also has a great self-control.

Retrieved from "https://seven-knights.fandom.com/wiki/Platin?oldid=52777"
Community content is available under CC-BY-SA unless otherwise noted.