Shane's childhood is revealed in her webtoon. Her childhood went by quietly and peacefully in a small village, until demons came and attacked it. During this attack her mother told her that her dad was gone and to hide away and not come out. Shane eventually comes out and discovers her mother has been killed by a large winged demon. When the demon goes to attack Shane, Sieg appears and saves her. Shane later discovers her brother on the ground surrounded by demons. Sadly he, too, has been killed.

Shane feels a tremendous amount of guilt for not protecting him. After this incident, Shane decided to leave the village and follow Sieg but he leaves her. She decides to search for him in other territories but she's accused of being a witch and almost burned until Rudy stops the attack. She was welcomed to joined the Holy Cross Crusaders and she worked hard to compete against others to become a member. She later woke up in a hospital and a lot of time had passed. The doctor from the hospital asks her many questions to find out more information and hides her while other hunters come looking for her to kill her (due to the rumours of being a witch) 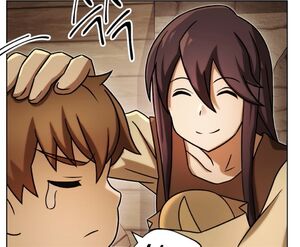 She willingly accepted to be the subject for the experiment by the Crusaders in strengthening the human body with demon blood. The reason behind this decision was her revenge towards those demons. Espada was very hesitant since she knew having demon blood was torture. The experiment did succeed in making Shane stronger, but it had one side effect: the demon blood will take over her body one day and she will go berserk. And it did come true, but fortunately Shane already made a seal to stop the demon from taking over. 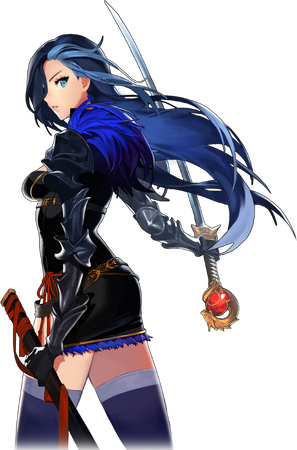 It is later revealed that there was once a witch named Medea who was loved by all including by Alcyon, the first emperor of skytria. However, she was betrayed by a colleague and killed by witch hunters. Her blood that spilled is what became known as the essence of demonic power. Before death, Medea had made a forbidden contract with Nestra for power. Somehow Shane carries this power, possibly accidentally given during her experiments to transfer demon blood.

The demonic power is extremely dangerous as it consumes the person completely and makes them lose their sense of being. 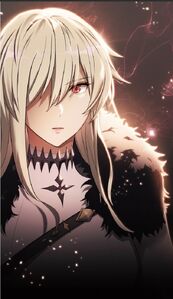 She is put under a curse by Bai Jiao in wish she sees the people from Li's village as the demons that murdered her family and town. She becomes filled with hatred and starts killing all the villagers. Li wants to defeat her at first but then learns of the truth, Shane feels incredibly guilty.

When the Crusaders learned of Pascal's plans they decided to follow the Seven Knights.

She awakens thanks to the power of the devil but manages to completely control her demonic side. She thinks of Sieg as foolish but also knows he's a good person. She respects both Orly, second captain of the holy cross crusaders and Aquila, the first captain. The crusaders seem to be on good terms with the Night Crow members.

Her demon side seems to take over and she seems to lose control of herself. This is when her myth awakening takes place.

Holy Cross Crusaders conducted an experiment using Demon power and in a dangerous situation during the extermination of demons, Shane managed to overcome all problems using demonic power inside her. However, Orly thought that the demonic power within Shane was very different from the others. 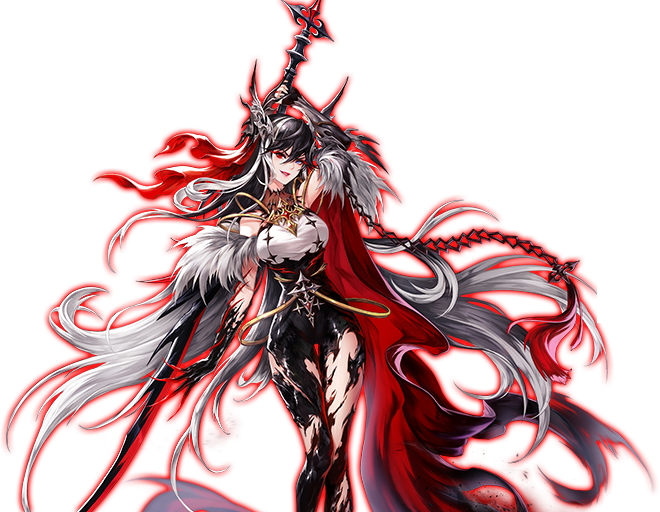 Shane said that she could control that power thanks to what Orly taught her and felt that her thoughts were nothing more than mere worries. But Orly said that she had received a necklace to seal the demonic power of Aquila for Shane.

It seems that they still have an alliance with the Night Crow. The power of the devil becomes unstable and starts breaking loose which makes Shane awaken with a new power. Slowly the demonic power starts taking over Shane.

Retrieved from "https://seven-knights.fandom.com/wiki/Shane?oldid=52512"
Community content is available under CC-BY-SA unless otherwise noted.